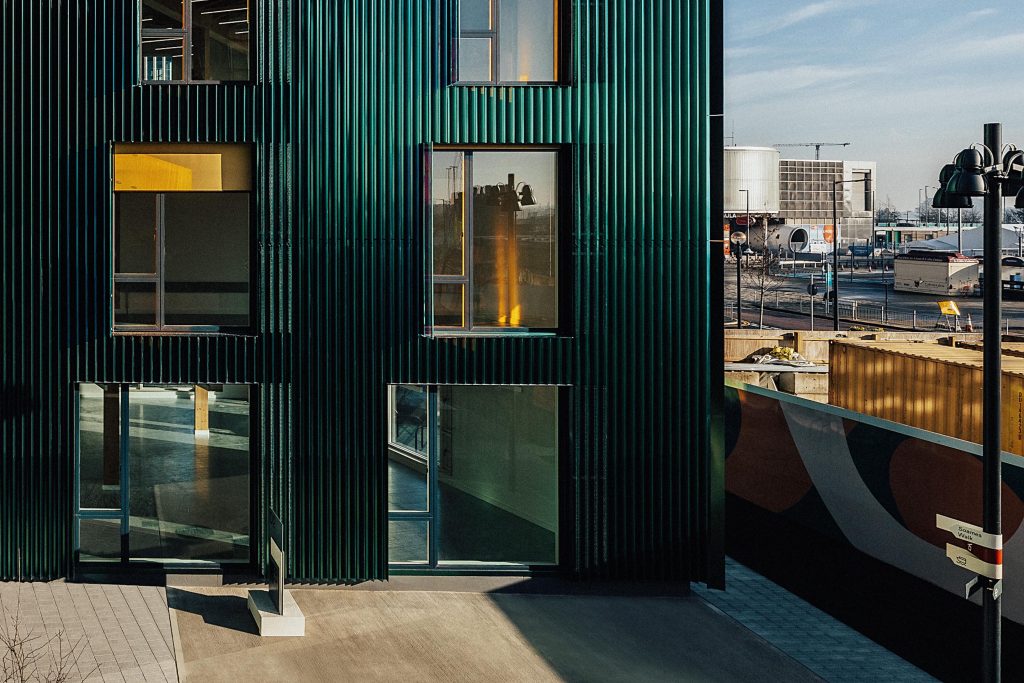 An urban plan by Assemblage (now HNNA) would have eight architects design 16 distinct buildings on a site in the heart of the Greenwich Peninsula, the former site of the historic East Greenwich Gas Works. The buildings are intended as workspaces for the creative industries: inexpensive, small-scale, flexible and diverse.

We were inspired by a photograph from the 1950s of two scientists – a man and a woman – working on fuel research on the site designated for our buildings. Dressed in lab coats (his dark, hers white) and holding instruments aloft, the image conveyed a palpable tension. The two buildings of Mole, C2 and D2, play against each other, the larger heavy and sturdy, the smaller light and colorful.

D2, the smaller building, which we’ve dubbed “Rhomboid” after the shape of its floor plan, is covered with a pyramid-shaped cladding whose two-tone color changes with the direction of the light. Louvres of dichroic glass surrounding the windows refract colored light across the facades. The colors are inspired by the changing colors of a gas flame.

Internally, we have designed individual studio spaces on each floor. Crafted entirely from wood, they have the feel of an old warehouse – sturdy and durable, with exposed beams and timber ceilings adding warmth and character.

Mole’s D2 building contributes to the vibrancy of the Design District and fulfills the client’s brief to design a “destination that holds thinkers, doers and doers in the very place where their ideas come to life”.
Meredith Bowles, Director, Mole Architects

The facade materials were shaped by the narrative of two buildings playing against each other. D2 is clad in a “clear” extruded aluminum profile chosen to accentuate the visible color palette of the dichroic paintwork. The result is a façade that appears alive and constantly changes from different angles or times of the day.
Hugh Craft, Project Architect, Mole Architects

D2 has been designed for construction with cross laminated timber to limit energy consumption, taking into account that both the embodied energy consumed during construction and the energy consumption in operation are limited. There is a saving of 48 percent of kgCO2/m² compared to an equivalent combination of substructure and frame made of reinforced concrete.

The construction of D2 not only reduced embodied energy, but also contributed to a more efficient prefabricated construction process, reducing time on site.

The solid wood storey ceilings are visible on the underside, with a double floor for the building services. The walls are lined with a phase change sheet material which, together with the external blinds and shutters, help to regulate the internal temperature during hot weather. The distribution of the windows and the shallow depth of their section allow plenty of daylight inside and help natural ventilation. The design was developed with Skelly & Couch’s M&E consultants who thermally modeled the buildings to ensure the building would perform as required.
Hugh Craft, Project Architect, Mole Architects

Dichroic finish
Adapta color
side by side
facade finished
adaptacolor.com