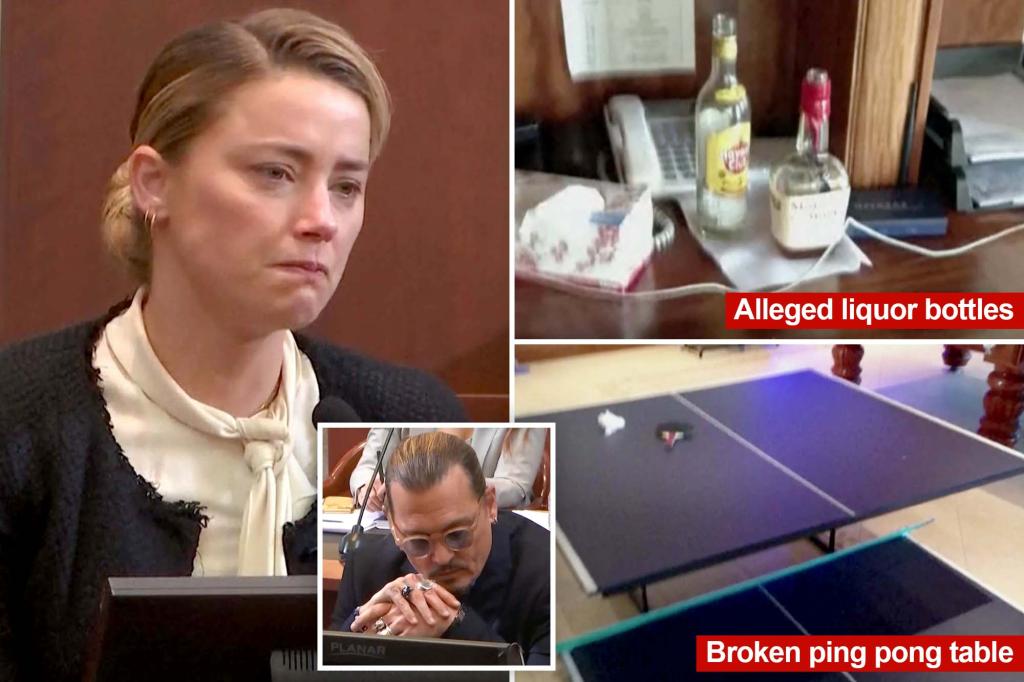 FAIRFAX, Va. — Amber Heard broke into profuse sobs on the stand Thursday as she recalled Johnny Depp allegedly threatening to ‘cut’ her face with a bottle — and then inserting it during a fight .

“I didn’t know if the bottle he had in me was broken,” she said, breathing heavily while holding back tears. “I couldn’t feel it. I couldn’t feel anything.”

The nightmare unfolded in March 2015 when the then-married couple was in Australia, where Depp was filming the fifth installment in the Pirates of the Caribbean film series.

The two got into an argument over drinking, and Depp taunted Heard with a bottle of liquor he was holding – which fell to the ground and broke after she tried to grab it, the actress said.

“That really upset him,” Heard testified, getting emotional as she recalled hitting the ground.

Heard continued, “I don’t know how much time has passed, but at one point he had a broken bottle on my face, neck area on my jaw, and he told me he was going to cut my face open.”

The actress tearfully testified that during the fight, Depp allegedly tore up her nightgown and hit the wall next to her head.

“I was naked and I was sliding around on this tile” on the floor, she told the jury. “He yells at me and says I ruined his life.”

“‘I f-king hate you. You ruined my frigging life,'” Depp yelled while smashing a phone “into pieces,” Heard testified.

“I look him in the eyes, I don’t see him anymore,” she continued and began to sob. “It wasn’t him. It was black. I’ve never been so scared in my life. I tried to get through to Johnny but I couldn’t see him at all.”

Heard then said “I’m sorry” as she was breathing rapidly in the stands and seemingly unable to continue speaking.

Later in her testimony, Heard attorney Elaine Bredehoft asked her to clarify for the jury whether Depp entered her vagina up to the pubic bone with a liquor bottle.

“I can’t believe I have to do this,” the actress told the jury. To which her attorney replied, “I’m so sorry.”

The harrowing incident was the same fight that left Depp with a severed finger – something he claimed on the stand happened when Heard threw a vodka bottle at him. The two had married just a month earlier.

Heard was shown pictures from the ruined mansion the couple rented Down Under – where Ben King, the property manager, previously testified to having found Depp’s missing fingertip.

One of the images showed two liquor bottles, and Heard told the jury she recognized one of them from the attack.

The actress said she took sleeping pills to fall asleep after the alleged attack and when her then-husband woke up injured.

“I found out he’s missing a finger,” she said, describing a devastated house with writing in dried blood on the walls, along with blue paint.

Depp wrote so many messages with the blood pouring from his severed fingers that “it seemed like he ran out of blood,” she testified.

“He wrote on the back of a pillow in blood,” she said, noting the brown color of dried blood, along with the writing on the mirrors, walls, and even a lampshade.

“He was full of color,” she said of Depp, who never fell asleep that night.

Depp, 58, is suing his ex-wife for defamation over her 2018 op-ed in The Washington Post, in which she described herself as “a public figure who portrays domestic violence.” He was never mentioned by name in the play, but claims it was clearly related to him.

In her testimony so far, Heard, 36, has portrayed Depp as a jealous and vengeful partner who would use drugs and alcohol and become violent.

How the Haji Healing Salon came about – South Side Weekly

The CFO’s role in promoting diversity, equity and inclusion