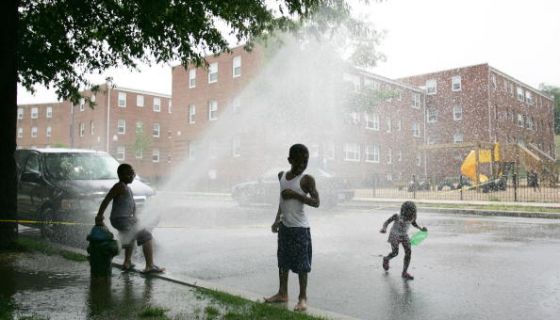 Understanding environmental racism and its impact on Black Americans

Racism is not always seen or heard. Sometimes it’s hidden in the systems that make America work. But you don’t have to see it for its effects to be catastrophic for black Americans.

When most people think of an environmental crisis, they think of climate change, which is understandable as this is arguably the biggest problem facing young people today. But what is always left out of the conversation is the fact that climate change is disproportionately affecting people of color and it is not coincidence, it is environmental racism.

Environmental racism is defined as environmental injustice occurring in a racist context, both in practice and in politics.

The term describes the disproportionate impact of environmental hazards on people of color. Higher air pollution and rising temperatures have always plagued communities of color, but so have a host of other issues.

It’s pretty hard to say that air pollution is the biggest problem facing black communities when Ahmaud Arbery can’t even go for a jog without losing his life. But the conversation is important because so many black Americans are affected.

To understand environmental racism and its effects, let’s first dive into its history.

The history of environmental racism

The term was coined by civil rights activist Benjamin Chavis in 1982. The environmental justice movement began during the civil rights movement in the 1970s. But environmental oppression dates back to America’s racist redlining practices in the 1930s. The Great Depression led to historic housing practices that allowed banks and insurance companies to color-code housing maps of U.S. cities and to differentiate neighborhoods largely by race. Black neighborhoods were color-coded “red” and classified as dangerous or of little value. This also allowed banks to control where black families lived in cities across the country, only allowing them mortgages in “restricted” areas, many of which are still predominantly black.

A recent study found that neighborhoods formerly red-tagged in the 1930s now have higher temperatures than non-red-tagged neighborhoods, nearly 13 degrees hotter in some places.

The study also found that families living in these neighborhoods experienced limited access to credit and limited real estate investment over time, leading to increased segregation and reduced home ownership.

Environmental racism is often misinterpreted as a problem that only afflicts poor people, but its impact on black middle-class Americans has been devastating. Landfills, power plants, and waste disposal facilities commonly find their way into the majority of black middle-class neighbors.

During a 2007 study, sociologist Robert Bullard found that race is a more accurate indicator of proximity to pollution than socioeconomic status. Bullard’s shocking revelation suggested that race was more important than income when it came to predicting the location of the nation’s commercial hazardous waste facilities. He proved that black Americans who make $50-60,000 a year are more likely to live in a polluted neighborhood than their white counterparts who make $10,000.

There are so many modern examples of environmental racism. One that stands out most in recent history is the water crisis in Flint, Michigan.

In 2014, the predominantly Black town switched its water source to the Flint River without properly treating the water supply. Over 100,000 people, including children, have been exposed to lead-contaminated water, including E.coli. Years later, Flint’s water problem is still not fully resolved.

Chicago has also recently waged a fight against environmental racism. The city recently denied a permit request for General Iron to move its operations to the southeast side of the city, which is predominantly Black and Latino.

According to a recent report, Black and Hispanic Chicago residents are more likely to suffer from chronic health problems because they live near industrial pollution.

Many of these cities do not have the right resources to win the battle against climate change. As heat waves, floods and hurricanes worsen, understanding environmental racism will also be important. The more we know, the more we can claim the resources we need to solve problems and save lives. While the plight of environmental racism is daunting, there is hope.

The environmental justice movement and the people who support it hope to be the catalyst for change.

Grassroots environmental justice organizations are trying to educate communities about the dangers of environmental racism, but it won’t do the trick without your help. Pay close attention to your local government and policies. If a landfill or waste disposal company wants to set up a facility near you, they first have to go through the city. Do not be afraid to put pressure on your elected officials if you oppose practices or policies that could harm your community. The power of the boycott can turn the tide

What is redlining and how can it be solved?

40 acres and a mule: what is amends and why is the concept so polarizing?