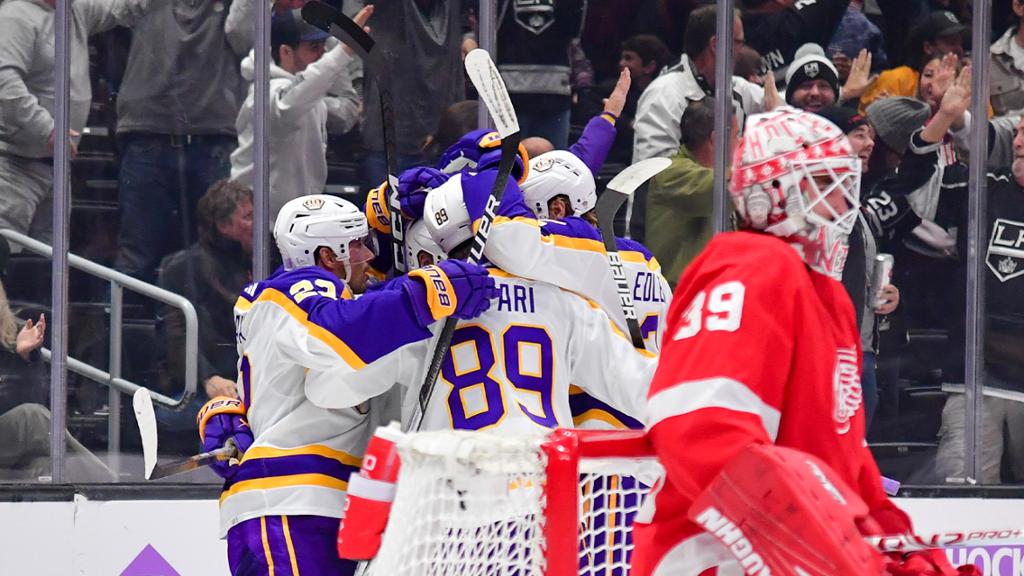 The week that was

The Kings went undefeated this week and took a 3-0-0 lead in the Crypto.com Arena. The week consisted of games two, three and four of the team’s four-game home stand, where they saw three familiar opponents. Each game was a rematch from earlier in the season, with the Kings visiting their opponent’s building. The Kings may have had a maximum of six out of six points overall, but each game had its own drama and each was a one-goal game.

The first game of the week started Tuesday with the Minnesota Wild in town. When the two teams met in October for the Kings’ first win of the season, they had a combined total of 13 goals. On this occasion they merged into one. Scoring the only goal of the game was King’s leading scorer Gabriel Vilardi who redeemed a nice pass to the slot from the captain Anze Kopitar. Shutting out the wilderness was Jonathan Schnell who picked up his 57th career shutout and was ranked 22nd all-time.

Two nights later, the Kings welcomed the Chicago Blackhawks. They say history likes to repeat itself, and on Thursday night it did. Just a week after losing 2-1 to home team Blackhawks in Chicago in overtime, home team Kings did the same. Philip Danault had one game by scoring and setting up the Kings’ only regular goal Kevin Fiala for the overtime winner with just 1.4 seconds left in the game. Jonathan Quick started for the Kings for the fourth straight game, stopping 31 of 32 shots.

Rounding out the Kings last week was a more scoring affair than the two weekday games combined against the Detroit Red Wings. In their final meeting of the season, the Kings relied on their power play for two goals and a third goal that crossed the goal line just a second after a Red Wings penalty had expired. Milestones were present as a game on Saturday night Adrian Kempe picked up his 100th career assist and Sean Durzi recorded his first career multi-goal game. The milestone clock now reads Kevin Fiala, who sits at 299 career points after a power play goal against the Red Wings. Cal Petersen started for the Kings and stopped 18 shots en route to his fourth win of the season.

Notable news from the past week:

The week that is

In the coming week, the Kings will weather a four-game road trip in Canada and the Pacific Northwest in the West when they face four division opponents, including three of them for the first time this season.

The Kings will begin their road trip against reigning Pacific Division champions the Calgary Flames at the Saddledome on Monday. It will be the Kings’ first look at the newly revamped Flames roster, which doesn’t include two departures from 100-point scorers in Johnny Gaudreau and Matthew Tkachuk, but additions from 115-point scorer Jonathan Huberdeau and Stanley Cup champion von 2022, Nazem Kadri. The Flames will start Monday’s game after just coming off a seven-game losing streak on Saturday.

The Kings will then travel to Edmonton and face the Oilers for the first time since Game 7 of the first round of the playoffs last year. Connor McDavid (32) and Leon Draisaitl (28) are currently in first and second place in the NHL on points. The Oilers are 6-4-0 in their last 10 games and have the second-ranked power play in the NHL (32.2%).

In the ladder half of the week, the Kings play back-to-back games on Friday and Saturday. First, the Kings will head west to Vancouver and face off against a struggling Canucks team currently sitting at 4-9-3. The Canucks have lost a league-high nine games this season while leading by multiple goals in one game. To wrap up the week and road trip for the Kings, Saturday will see a tilt against the Pacific Division’s biggest upset, the Seattle Kraken. 8-5-3, the Kraken currently sit third in the division, two points behind the Kings. In their last meeting earlier this season, the Kraken defeated the Kings 4-1 at Crypto.com Arena.