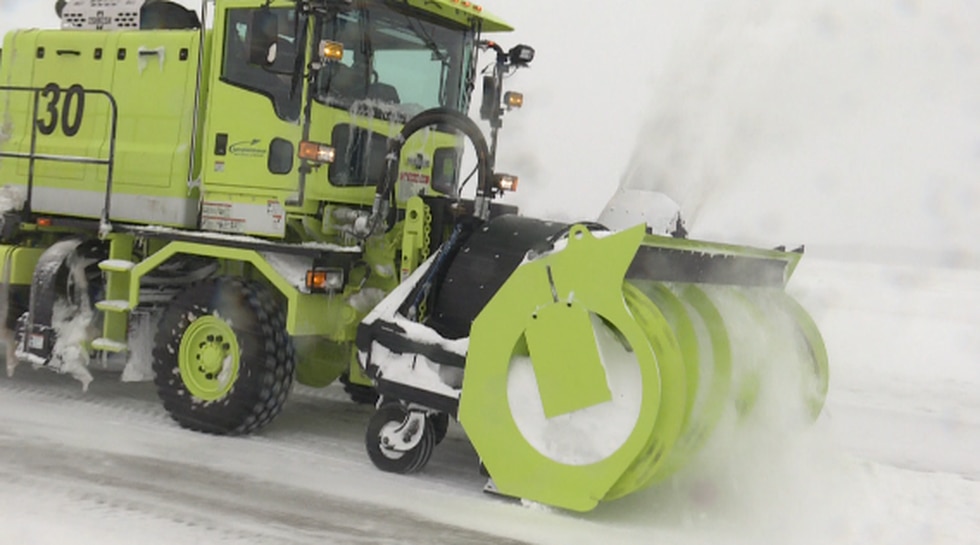 SPRINGFIELD, Mo. (KY3) — As ice and snow ravage airports across the Midwest, Springfield-Branson National Airport remains open thanks to the tireless efforts of crews who kept the runways and parking lots clear.

However, problems at connecting airports across the region have resulted in many cancellations and delays.

“About 62 percent of the flight schedule has been canceled and it’s not just because of the snow here in Springfield,” said Kent Boyd, public information and marketing manager for Springfield-Branson National Airport. “A huge ice storm is raging in Dallas. In fact, the Dallas airport was partially closed Thursday morning. There was snow in Denver and Chicago. So the storm basically devastated the middle two-thirds of the country.”

“This is probably the biggest snow event I’ve had in my five years here,” said David Schaumburg, associate director of aviation at Springfield-Branson National Airport, who oversees the plows and blowers that constantly criss-cross the runways .

“We’re on runway 220 right now and we’ve got a lot of dry, windblown snow building up on it, so we have to keep monitoring that,” he said as a snowplow sped by. “We can’t use salt. It is highly effective but also highly corrosive. The FAA restricts that so we don’t cause unnecessary damage to aircraft.”

Different chemicals are used on the runways, just as different types of glycol are used to de-ice aircraft.

“They use Type 1 when the plane has been there all night and has frost or snow on it,” said Schaumburg. “The Type 4, leaving a green color, is laid on the leading edges and surfaces that help generate lift just before takeoff when precipitation is still falling. If they don’t put it there, the precipitation could stick to the wing.”

The plane’s tires aren’t made for traction, but the runways have grooves to help with traction and drainage.

“You can still land on snow,” said Schaumburg. “But if I report that the runway is 100 percent covered with ice, no one will land. So some snow on the ice actually gives the ice a little bit more traction and friction.”

The combination of ice and snow has kept the crew of eight busy around the clock since Wednesday.

“I’m pushing for almost 20 hours at the moment,” said Schaumburg on Thursday afternoon. “But I can’t say enough good things about our crew. We’ve been a little understaffed lately, but everyone is stepping up to the top and working overtime. They really took responsibility to make sure the airport stays open and safe.”

And as long as the weather conditions persist, the crews will remain at their posts.

“If it stops snowing in the middle of the night, you can’t go because it could start snowing 20 minutes after you leave,” Boyd said. “Then the work you’ve been doing all day just goes in the pot.”

“Typically it takes the airlines two to three days to get over an event like this and the reason is all their planes are out of place,” Boyd said. “For example, a plane is scheduled to arrive in Springfield tonight and depart Springfield tomorrow morning. If it doesn’t arrive tonight, the flight will be canceled tomorrow morning. This is what we are confronted with on Friday. There will be cancellations even though it’s not snowing and I wouldn’t be surprised if we see cancellations by the weekend.”

To report a correction or typo, please send an email [email protected]

Skin cancer is still a risk for the black community