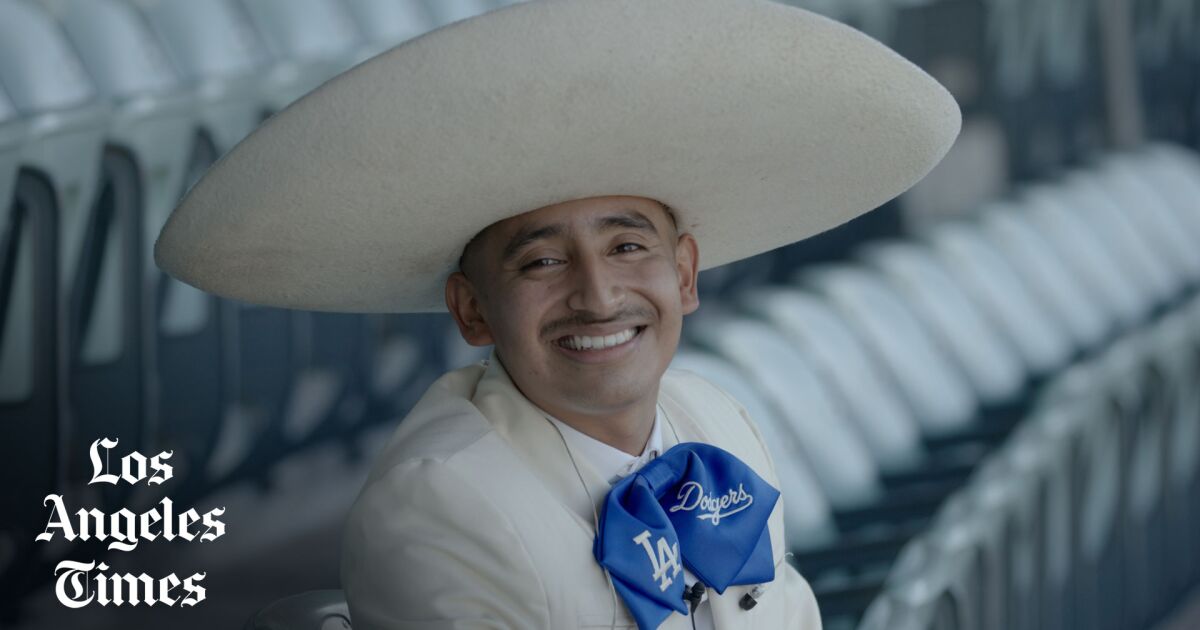 How the Dodgers’ mariachis became a very LA tradition

A crowd gathered between sections 308 and 310 in the right pavilion at Dodger Stadium. Anticipation buzzed. It was 6:19pm last Tuesday and the show was about to start.

Not the show with Mookie Betts and Justin Turner and Freddie Freeman. The one with the eight-piece mariachi—seven men and one woman—in white Charros with dodger blue moños, or fly, for a pop of color that gives the ballpark a feel unlike any other in Major League Baseball.

Every Tuesday this season, the Dodgers have hosted a mariachi to play before and during games. Mostly, the featured group was Mariachi Garibaldi de Jaime Cuéllar, and they will return for the first playoff game against the San Diego Padres this week.

Last week’s show, the regular-season finale, also featured Mariachi Garibaldi and kicked off after hosts at the stadium introduced the ensemble to the crowds, who braved LA traffic to arrive early.

The group performed while people watched from behind, blocking the sidewalk and singing along. Most had their phones tapped. There were Urías, Valenzuela and González jerseys, but also many Kershaw and Bellinger jerseys. A man wore a cap and jersey belonging to the Tomateros de Culiacán, the baseball team in Julio Urías’ hometown, Mexico. A woman let out a deep-throated scream or grito.

The 10-minute set featured harp, guitar, and trumpet solos. When it was over, the oldest member of the group, Gustavo Hernández, belted out an exclamation point.

Jimmy Cuéllar grabbed his phone and recorded the wild crowd over his shoulder for the group’s Instagram livestream. Hernández, a guitarist, took a selfie with fans. The crowd dispersed, but the night was just beginning. The group had four more sets to play during the game between the Dodgers and Colorado Rockies – 90 seconds after the end of the first, third and fifth innings before performing “Take Me Out to the Ball Game” in the seventh inning.

Mariachis had played at Dodger Stadium for years, but that performance in front of 56,000 fans in the spotlight was unprecedented attention. What began as an experiment last October became a cultural breakthrough. A year later, the in-game sounds of a live mariachi are a hallmark of the Dodger Stadium experience, which continues into the postseason for every Game 1 and potential crucial game the Dodgers play.

“It started out as a rehearsal to see if we could cheer the crowd a little bit more,” said Cierra VanDyke, the Dodgers’ manager of marketing and promotions. “And it was a hit.”

The son of Mexican immigrants, Jimmy Cuéllar was born and raised in Bakersfield surrounded by mariachi artists in his family. His father Jaime started Mariachi Garibaldi as a youth group in 1994. Jimmy was 12. He played with his father and uncles. It was first class training.

In 2004, he left home to visit Cal State Long Beach and joined Los Camperos, a Grammy-winning mariachi group. A dream became reality. But after a decade, he decided to go back to his roots or bring them to himself.

A showcase for compelling storytelling from the Los Angeles Times.

He relocated his father’s mariachi group to Los Angeles. It remained named after his father – Mariachi Garibaldi de Jaime Cuéllar – but he became its director and leader. The ensemble slowly gained importance on the market. They will be touring for the sixth straight year in December, performing in Texas, North Carolina, and Northern and Southern California. They will be touring again with his wife Kareli’s ballet folklorico company. By day, the couple runs a performing arts school in Bell Gardens.

The mariachi group’s trajectory changed a few years ago with an unexpected call from the Dodgers: Could they perform before a game if fans entered the stadium from behind the pavilion? They did the gig and soon the Dodgers called again and asked for another show.

“It started out as a dry run to see if we could hype the crowd a little bit more. And it was a hit.”

— Cierra VanDyke, manager of marketing and advertising at Dodgers

Last season, the Dodgers asked her to appear at Viva Los Dodgers, a pregame event the organization hosts on the last Sunday of the month. The group’s profile soon became national.

It started out like a normal day at the ballpark. The musicians were warming up when they learned that Dodgers then-closer Kenley Jansen asked them to take to the field to perform “La Bikina” – a traditional mariachi song revived when Luis Miguel published his version in 2000 – playing for Urías.

They were playing when Joe Kelly, another former Dodgers pitcher, asked if one of the mariachi members would trade one of their jackets — a heavily embroidered navy Charro – for one of his jerseys. A trumpeter, Grover Castro, agreed, but the exchange had to wait until they had performed the national anthem.

Days later, the group woke up to a text with a photo of Kelly’s wife. Kelly, whose mother is Mexican, wore the jacket – blue with white embroidery – to the organization’s visit to the White House as the defending World Series champion.

“Looking back, it’s still a crazy and surreal thing for us,” said Castro, a 25-year-old Los Angeles native. “That was a moment of pride for us.”

Interview requests came from all over the country. Cuéllar said they woke up at 3 a.m. in Los Angeles to do interviews for shows in Miami. People called and asked if they could buy their own jacket. Cuéllar estimated the group sold a handful for $600 apiece.

A man once asked the group to come to his wife’s birthday party in Manhattan Beach on a Saturday. Cuéllar told him they couldn’t arrive until after midnight. Never mind, said the man. His wife was a big Dodgers fan and wanted to see the jackets. She burst into tears when they showed up and played a few songs.

“Things accelerated for us after that,” Castro said. “That put us on the map.”

The Dodgers had another idea for them last October: What if you perform during a playoff game?

What? Elton John, The Beatles, The Three Tenors and Madonna played sold-out shows at Dodger Stadium. Mariachi Garibaldi has performed in backyards, concert halls and everywhere in between, but nothing like that.

“The stadium is so big,” said Cuéllar. “It’s pretty scary.”

The group took the opportunity. Then came the fundamental question: how would that work? Cuéllar didn’t want to distract the group from the game. A plan was hatched between the two parties. The mariachi would perform a short pregame show and would be given four 90-second sets during play for a set daily fee. The plan was first carried out in Game 3 of the National League Championship Series between the Dodgers and the Atlanta Braves, and again in Game 4.

The Dodgers won Game 3 but lost Game 4 to fall into a three-game-to-one series hole, but the mariachi was a smash. After Game 4, the ensemble appeared on television during post-game coverage for Curtis Granderson, Jimmy Rollins, Pedro Martinez and Bob Costas behind the set.

The next night, singer Julián Torres performed with Mariachi Los Toros on the mic for Game 5. Torres dedicated the performance to Vicente Fernández, the legendary Mexican singer who fell ill and later died in December.

He wowed the crowd with “Volver, Volver” and became an instant fan favorite for his voice and charisma. The Dodgers beat the Braves to extend their season, but that was their last home game of the season; They lost in Atlanta two days later.

By the end of that season, substitution became a staple at Dodger Stadium. Fans came Tuesdays, expecting a familiar show, a wrinkle found only at the Los Angeles ballpark, from the right field pavilion at Chavez Ravine. They’ll enjoy another one with a side of playoff baseball on Tuesday.

What color makes you angry? The one shade to avoid indoors |