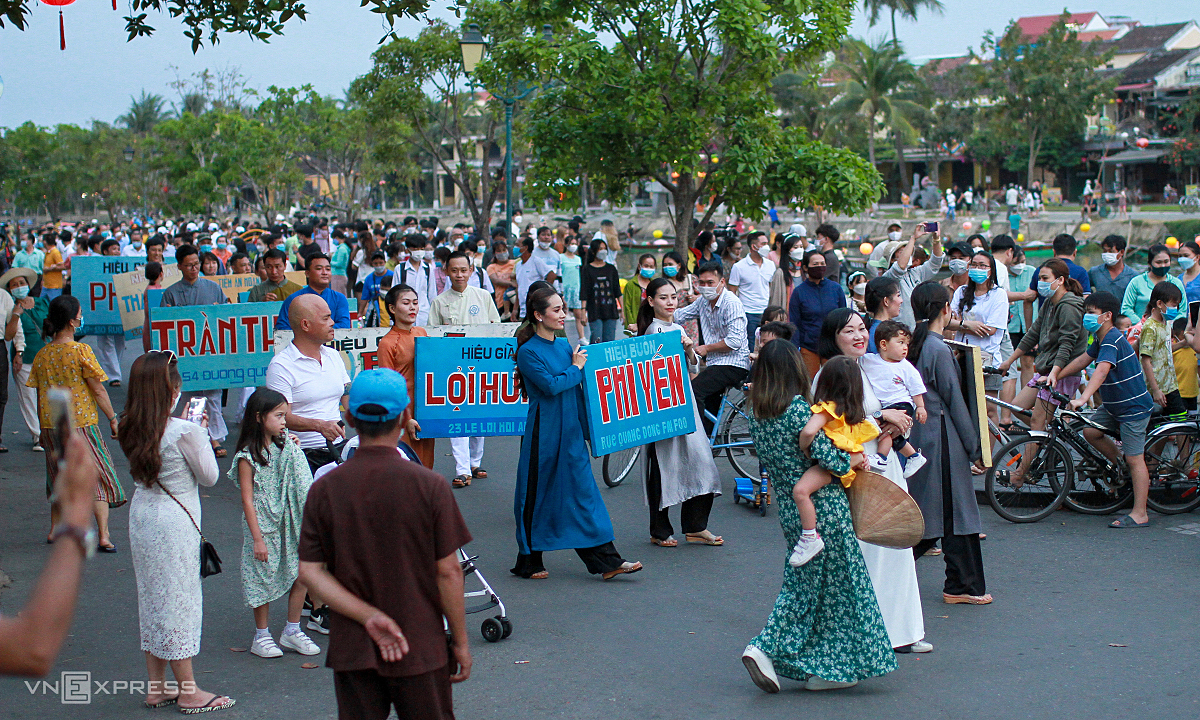 The Vietnamese have four days off for Reunification Day and Labor Day since both April 30 and May 1 fall on the weekend. Many people started planning their trips at an early age.

In online groups selling tours, there are dozens of inquiries about ticket prices and hotel bookings for popular destinations like Phu Quoc and Nha Trang.

Hoang Thanh, who lives in Hanoi, said he managed to snag a good combo deal online. When he tried to shop for a tour last year, he booked too close to the trip when prices skyrocketed. He learned his lesson and decided to book early for his family this year.

“This year we chose Quy Nhon (on the south central coast) as the prices are relatively cheap and there may not be too many people. As there is no more Covid quarantine and lockdown we don’t have to worry about our bookings being cancelled. We will still wear masks just to be safe,” he said, adding that all four members have already recovered from mild Covid-19.

More than a month before the holiday season, tourism company BestPrice said the number of customers wanting to book its services has increased by around 30 percent from just a week earlier.

According to online tourism booking platform Agoda, several hotels and resorts in Sa Pa in northern Lao Cai province are 90 percent booked for the April 30 and May 1 holidays. These include places like Topas Ecolodge, Sa Pa Jade Hill Resort, Eden Boutique and Muong Hoa View Hotel.

Tran Thanh Thuy, vice chairman of the Sa Pa Tourism Association, said many customers have chosen to book early as there are few high-end hotels in Sa Pa. In fact, demand for them is so high that they’re typically 70 percent full on weekends, he added.

“The number of visitors to Sa Pa for the April 30-May 1 holiday is expected to continue booming this year, filling all available rooms,” he said, adding that tourists are now less concerned about the pandemic than before .

According to Booking.com, many hotels near the coasts of Nha Trang and Vung Tau are also fully booked during the holidays. The same is happening at hotels and resorts in Kien Giang, home to the country’s largest island, Phu Quoc.

Nguyen Vu Khac Huy, vice chairman of the Kien Giang Tourism Association, said that as of March 25, many three-star hotels in the area are already occupied and travel agencies are working around the clock to finalize tours during the holiday.

“I assume that there will be as many visitors as there were during the holidays from April 30th to May 1st last year. The domestic tourism industry is experiencing a revival,” he said.

Prices before the pandemic

Flight prices from Hanoi and Ho Chi Minh City to other key destinations like Phu Quoc, Nha Trang, Quy Nhon, Da Nang and Hue could even double. For example, a flight to Phu Quoc would usually cost VND 2-3 million ($87-131) per person, but during the holidays the cost can go up to VND 5 million.

Four- and five-star hotels could also see rates rise about 30 percent, Thanh Tu said. It would be harder to predict price changes for two-star hotels because they can change abruptly, especially when visitors are so close to them book your visit.

“During the holiday season, people shouldn’t expect cheap deals as prices would go up 30 to 50 percent compared to usual.”

Nguyen Hieu, CEO of tourism company Vitamin Tours, said price hikes during the holidays are a given. However, due to the ever-increasing demand for travel, prices are rising even more than last year’s holiday season, even returning to pre-pandemic levels in some areas.

“Customers shouldn’t worry. Even if the prices are not as low as during the pandemic, the shelters would still gift their customers with additional services,” he said.

Business officials are also advising people to buy plane tickets early as prices are rising every day. People could also select dates after April 30th and May 1st for cheaper deals.