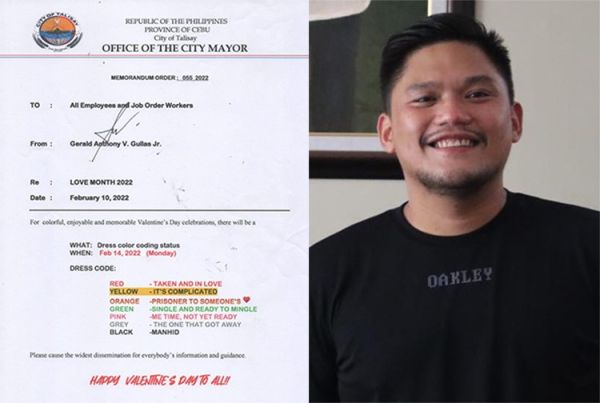 EXPLANATION: The Valentine’s Day dress color code is not new, even for LGUs, although not in Cebu. Talisay Mayor Samsam may just be more fun-loving than other local CEOs.

Although no penalty is specified in the memo, workers must assume that ignoring the order will harm them and give them “pogi” points if they do. The MO also carries a request to “create the widest possible dissemination of information for everyone” and a desire for a “colorful, fun-filled Valentine’s Day celebration.”

DRESS COLOR DECLARES ABOUT LOVE STATUS. The group activity requires members of the community – in this case the staff of Talisay City Council – to tell about their individual love lives to those around them and to the public who sees them that day.

DOES IT VIOLATE PRIVACY? Most likely not, since the mayor’s order is (a) not coercive, (b) there is no penalty, and (c) one can hide the state of one’s love life by not wearing one’s true color. An official or clerk at Talisay City Hall can wear red even if they don’t have a lover, suitor, or aren’t in love with the person they’re dating.

Also, many people, especially women, wear red on Valentine’s Day to show the world that they are in love. Social media posts on or around this day will be pouring in, indicating that many people are not shy about being in a relationship, although the lament for lovelessness is hard to see. These days, with many people flaunting their feelings on Facebook, Twitter, or Instagram, an order from the mayor to show them by a dress color code at City Hall is unlikely to cause controversy.

[] Palawan State University, which issued a memorandum to its students in 2020, although it wasn’t an order (they were “permitted”).

[] The student council of San Beda in Alabang, which in 2018 encouraged students to “wear the colors associated with their love status”.

Mayor Samsam’s idea for Valentine’s activity isn’t original, but in Cebu, he may be the first local business leader to show joy in fun amid the pandemic and post-typhoon hardship. There must be another mayor or governor who does this, but this initiative just hasn’t been as widely disseminated as that of the mayor of Talisay.

LOVE STATUS DESCRIPTIONS. A big part of the fun comes from the meaning given to the color, and the audience that sees it knows its meaning.

Knowing the meaning is important. For example, pink in Talisay means “me time, not ready yet,” but elsewhere pink means “strike anywhere, no strings attached.” Talisay’s green means “single and ready,” while elsewhere it means “I’m having a hard time moving on.” Black in Talisay is “manhid” (or numb), while in Naga City black means “taken for granted” and elsewhere means a protest against the Valentine’s frenzy or woman’s dislike of her lover.

There are also colors for some status reports that aren’t in Mayor Samsam’s note, like white for “Like a Virgin”; purple for “single but content”; and brown for “Pusong Bato”.

Employees and the public will understand the message of the dress if they give it the right meaning.

POLITICS IN DRESS CODE. Mayor Gullas’ competitors may see politics in the meaning of a few colors.

dyCM broadcaster Eric S. Manait noted that the meaning Mayor Samsam attributed to Rosa was “time for me, not ready yet.” Pink has been linked to the Robredo-for-President camp and Leni, who is not ready for the country’s chief executive job, has been slammed by critics, most notably President Rodrigo Duterte. Mayor Samsam told broadcaster Jason Monteclar last week that the Gullases are supporting Bongbong Marcos. Would Talisay’s role in “not being ready” for pink have any political, uh, color?

Yellow, the color of the Liberal party, also has a Talisay meaning that may not be flattering to candidates associated with the Aquinas’ “Dilawan.” Yellow in Talisay means “it’s complicated” or many parts or aspects of it make love life difficult to deal with or understand.