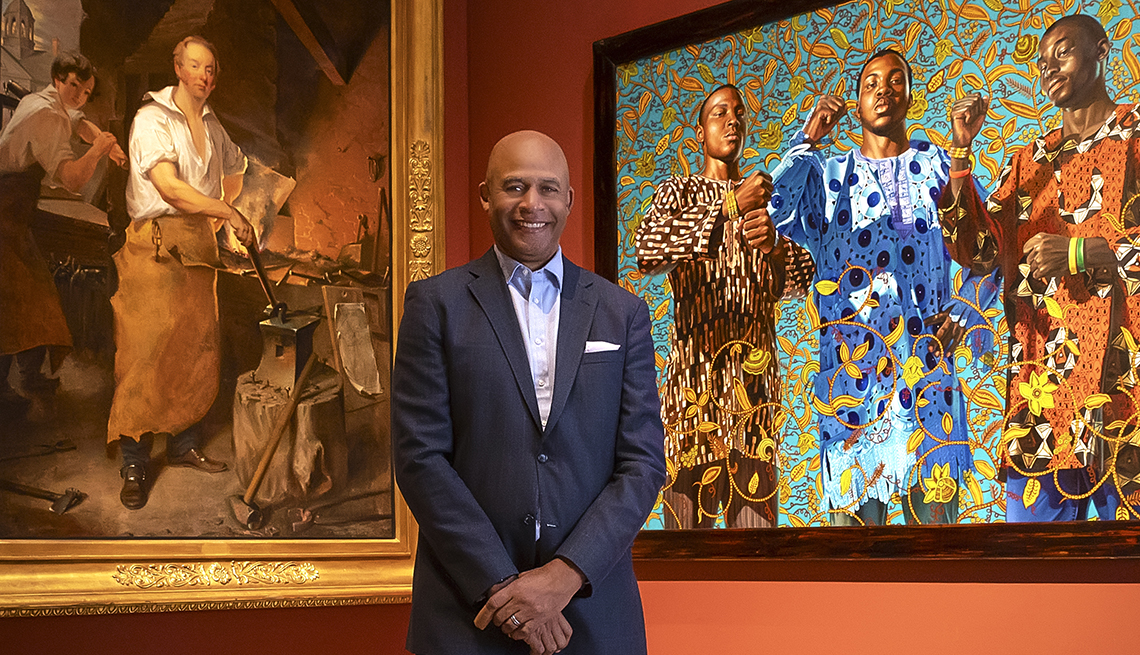 Eric Pryor is the first black director of the Pennsylvania Academy of Fine Arts.

Eric Pryor began his college career majoring in basketball. But where he ended up in life was between paintings, sculptures and artists.

Pryor, 59, was recently named the first black director of the Pennsylvania Academy of Fine Arts. Founded in 1805 by artists and business leaders, PAFA is the nation’s first and oldest art school and museum, according to the organization’s website, and focuses on historical and contemporary American art. PAFA also offers art classes and educational programs for younger students and adults.

As the new President and CEO, Pryor is the face of the institution, raising money, building partnerships, encouraging its curatorial staff and ensuring the public understands PAFA’s mission.

Pryor is not new to this world. Prior to joining PAFA, he directed the Harlem School of the Arts in New York City for more than six years, where he charted the course of the organization and oversaw the day-to-day operations of the cultural center that brings the arts to thousands of underserved students and their families.

But his ascent into the world of fine arts was not preordained. Pryor, who grew up in Detroit and attended college in Georgia on a Division II basketball scholarship, switched his major from business to art and then gave up the scholarship. Eventually he returned to Detroit, where his mother, Dell Pryor, is a well-known gallery owner and advocate for black artists. Pryor earned a bachelor’s degree in painting from Wayne State University in Detroit and a master’s degree in fine art from the Tyler School of Art at Temple University in Philadelphia.

Pryor’s path has made him a pragmatic advocate for artists of color who have often been marginalized or ignored.

This interview has been edited for brevity and clarity.

A childhood interest intensified in college

There was a company in Detroit called Broom Design that created one of the first line of black image greeting cards. So that was an early thing. But I didn’t really take it seriously as something I would do for a living. That happened later when I was in college. My mother and father were both entrepreneurs and I never saw them work for companies. So I knew I wanted to have my own business. I was an economist. And around the same time, my best friend was a guy named Demar Loving. His father, Al Loving, was a painter in New York City. We took a trip up the east coast and I met his father and he took me and his son to the Hamptons. It was in the 80’s and all of a sudden I got in touch with different artists like David Hammons and a lot of other people. It was transformative.

[The artists’] Curiosity piqued my curiosity and made me want to be a part of this community. After that trip, I changed my major to art, played basketball for another year, and then I left scholarship and embarked on an art journey. I knew I wanted to be in a community. I wanted to be with people like that.

A painter who wanted to educate others about art

When I did my high school [in Philadelphia]I wondered how I would survive. I ended up getting jobs as a teaching artist in various community-based art organizations. I interacted with these kids and it was interesting how they responded to the creative practice. It reminded me of how I reacted to some of my early encounters with the sport. That was the beginning when I really realized how important arts education is and how it can be a catalyst for a young person.

The first time I saw Henry O. Tanner’s work in person was here at PAFA. I found out it was here and that was part of the visit for me. I wanted to see his work because at the time I was also looking for myself, if that makes sense, as a young black man trying to see the intersection of who I am historically and the community I come from, and where that intersection was.

My previous experience curating exhibitions by artists of color, as well as my previous leadership roles at the Harlem School of the Arts and the New Jersey State Museum, have given me a unique perspective to lead institutions with a more diverse audience and to know what those audiences are drawn to to. I hope to use this knowledge to create programs, exhibitions and education that attract all people.

PAFA has a long history of training, collecting and exhibiting the work of Black artists, which is what attracted me to this position. PAFA was the first institution to train artists like Tanner and Mary Howard Jackson. This, combined with PAFA’s world-renowned collection of American art, provides me with a strong base to drive change in the evolving field of art schools and museums, and to inspire other leaders to do the same. My goal is to give a voice to artists who have historically been marginalized without oppressing those whose talent has been given more opportunities.