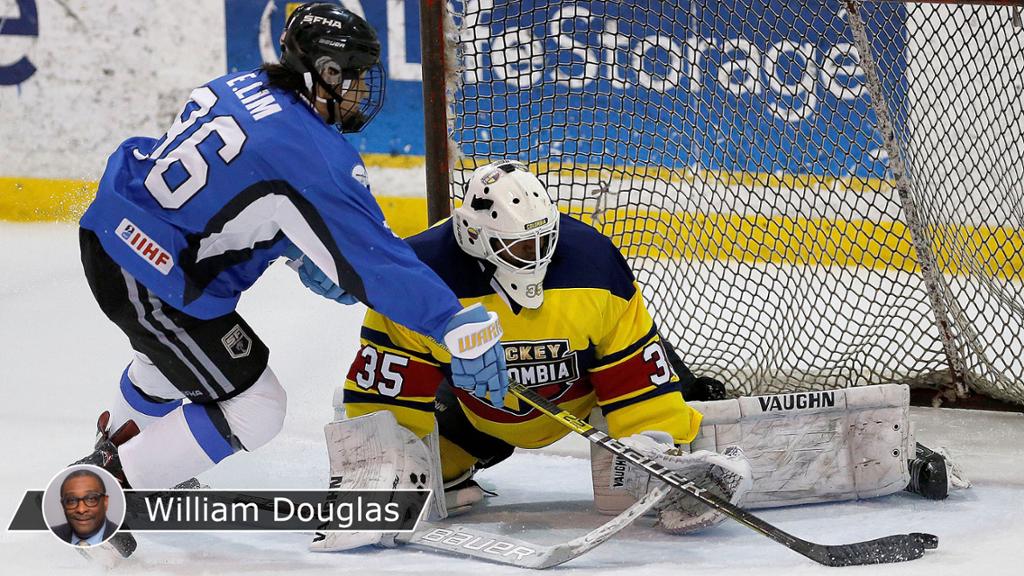 William Douglas has been writing The Color of Hockey blog for 10 years. Douglas joined NHL.com in March 2019 and writes about people of color in sports. Today he introduces the Dallas Stars, who will host the inaugural Amerigol LATAM Spring Classic tournament March 24-27, featuring teams from four countries and Puerto Rico.

Al Montoya said he had heard about the Amerigol LATAM Cup and how the seriousness of the sport of hockey matched the excitement of the fans at the tournament.

But the Dallas Stars’ director of community outreach and retired NHL goaltender was amazed by what he saw while attending the tournament hosted by the Florida Panthers at their practice facility in Coral Springs, Fla., in October.

“The action was wonderful, the music, the jerseys, the flags in the stands,” said Montoya, the NHL’s premier Cuban-American player. “I didn’t expect to see all that. I think that’s the beauty of this tournament, the passion that the players and the fans put behind it.”

Five men’s teams and more than 100 players from Argentina, Brazil, Colombia, Puerto Rico and Venezuela will take part in the spring tournament.

The Stars are providing players with complimentary ice time, officials, ground transportation, meals through a local restaurant and convenience store, and tickets for players to see Dallas host the Vancouver Canucks on March 26th.

Hosting the tournament this month and in 2023 is part of the Stars’ ongoing effort to expand hockey within the Hispanic community, which makes up nearly 42 percent of the city of Dallas’ population, according to the latest U.S. Census data.

“That kind of thing helps us grow the game of hockey,” Montoya said, “and not through us doing anything, but through these players who come here and have the opportunity to play hockey from Latin America … where hockey isn’t theirs.” Tradition is sport and where there may be no ice rinks.

Montoya has served as Dallas’ Community Outreach Director since September 2021. He became the first Cuban-American player in the NHL when he debuted with the Phoenix Coyotes on April 1, 2009. Selected by the New York Rangers in 2004 as the No. 6 NHL draft, he went 67-49-24 in 168 games (136 starts) with six teams before retiring after the 2017-18 season.

Montoya and Lucas Reid, director of amateur hockey and partnership development at the Stars, introduced the Spring Classic idea to Juan Carlos Otero, President of the Amerigol International Hockey Association, and the LATAM Cup teams at the October tournament.

Otero said teams have strived to host more than one tournament per year to give players from countries with few or no ice rinks more opportunities to play.

With ice unavailable, many of the players compete in inline hockey in their home countries. They usually arrive days before the LATAM Cup tournament to practice on ice and transition from skating on wheels to steel blades.

“From the beginning everyone always wanted to have a second (tournament) because as far as playing on the ice, the coaches have access to the players once, maybe twice a year,” said Otero, who created the LATAM Cup in 2018 . When that opportunity came up, I thought it was great.”

Montoya said the global spread of the Omicron-COVID variant late last year slowed planning for the Spring Classic. But after a drop in cases eased, Stars officials said they were determined to make the tournament a reality.

“These tournaments are like their Stanley Cup,” said Montoya. “When they walk into our Dallas Stars facility, we want them to see that this is their tournament, this is their weekend, whether it’s the signage or the music, whatever.”

Sam Uisprapassorn, a coach for the Colombia national team, said he and his players can’t wait to arrive in Dallas. The Colombian men won the LATAM Cup Division I title in October.

Uisprapassorn said the Spring Classic will be good preparation for Colombia as they prepare for their first International Ice Hockey Federation-sanctioned tournament, the IIHF Development Cup May 4-7 in Fussen, Germany.

They compete in the tournament for national teams whose federations are IIHF members but do not participate in World Championships, against Algeria, Andorra, Ireland, Liechtenstein and North Macedonia. Colombia has been an IIHF associate member since September 26, 2019.

“The Spring Classic is a win-win for all countries, all federations and the NHL teams who have been kind enough to host us,” said Uisprapassorn. “I think the Panthers have done a phenomenal job in what they’ve done and I expect the stars will follow suit.