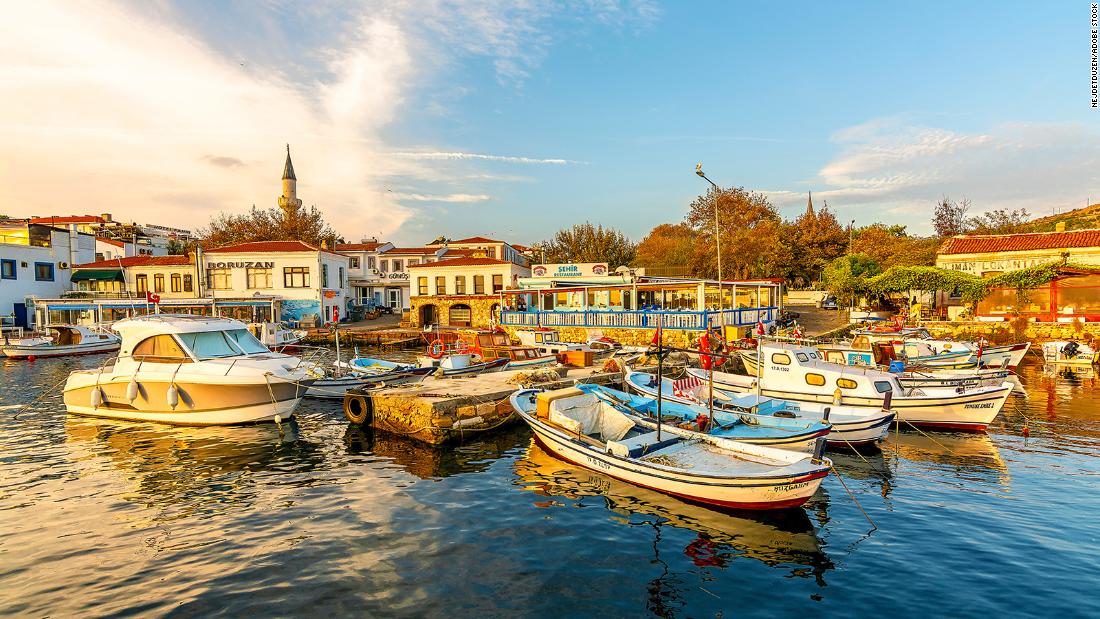 Bozcaada: An unspoilt island paradise in the Aegean Sea

(CNN) — It takes around half an hour to reach Bozcaada Island from Geyikli Port on mainland Turkey, the glittering expanse of the Aegean Sea is a constant visual companion.

When this idyllic island sails into view, one of the first things that catches your attention is the Castle of Bozcaada, a brave protagonist who represents the island’s long history, stretching back to classical antiquity.

The Romans were here. So were the Byzantines, the Venetian Republic and the Ottomans. It is also mentioned under its alternative name Tenedos in Homer’s “Iliad”.

And in many ways, it hasn’t changed over the centuries – especially when it comes to offering tranquil escapes relatively untouched by modern life.

Strolling through the island’s cobblestoned city center, it’s hard to resist the lingering influences of its former Greek residents. Everywhere there are old stone houses and taverns with wooden tables and chairs, where fresh seafood, meze, rakı (aniseed flavor) or wine are served every evening.

The bell tower of the 19th-century Church of St. Mary, one of the two remaining Orthodox churches on the island, juts out from between the flat, orange-tiled roofs.

In the main square, people are sitting around enjoying their coffee and sweet or savory pastries Small coffee shopwhile flipping through books and magazines a few blocks away at Bozcaada Kitapçısı (Bozcaada Bookshop).

At night, the sleepy streets of Bozcaada come alive.

In the evenings, people gather in bars such as Salhanea former slaughterhouse painted lemon yellow with sea and castle views to enjoy a glass of local wine or a few cocktails.

Speaking of local wine, this is the other protagonist of Bozcaada, with a viticultural history stretching back almost 3,000 years. Old and new winemakers successfully continue the tradition, especially endemic grape varieties such as Çavuş, Vasilaki, Kuntra and Karalahna.

Wine aroma is prominent on Lale Street. Here is the Talay Vinothek and production facility, in operation since 1948.
A few streets later amadeusRun by Austrian winemaker Oliver Gareis, also offers wine tasting while the Çamlıbağ The family winery has existed since 1925 and is now being run by the fourth generation.
However, the most famous vineyard on the island remains corvusfounded by architect Reşit Soley in 2002, successfully revitalizes the island’s wine tradition and brings it to an internationally recognized and award-winning stand.

It was Soley’s tenacity and Bozcaada’s long history in viticulture that inspired aspiring winemaker İlke Yasa and brought 2021 to the Corvus Vineyards, which sit right on the bay of Tuzburnu, one of the island’s many beautiful seaside resorts.

“For me, the best time on the island is April, May, September and October,” she says. “The crowded time is August, which coincides with the busy wine harvest. During the day hours are spent under the sun among the vines and at night people gather on beaches that are not accessible by car, bonfires are lit and people dance the night away.

“Especially during the year Bozcaada Jazz Festivalthe whole island turns into an open air music place, so many nice people come, so many great conversations, rakı and wine.”

The island is located in the Aegean Sea off the coast of mainland Turkey.

Perched on one of the island’s highest peaks, the Sunset Houses holiday homes overlook the sea between the valley and the dusk that bathes everything in its orange glow each day.

At night the sky is full of stars and only the changing winds are a reminder that this is an island in the middle of the Aegean Sea.

During the day, the island’s many hiking trails lead through vineyards and orchards where figs, pomegranates and olives bloom. The scents of rosemary, wild oregano and sage are omnipresent.

For all these reasons and more, Bozcaada remains one of the most unspoilt islands in the Aegean. When the 2020 pandemic hit, it became an escape for many city dwellers yearning for more space and a connection to nature.

It was around this time that Sinan Sökmen – founder and CEO of award-winning boutique travel agency Istanbul Tour Studio – and his wife Seda Domaniç, founding editor-in-chief of Vogue Turkey, decided to buy a house on the island.

After meeting and marrying on the island, a strong emotional connection to Bozcaada made their decision easier, as did its pristine beaches and fresh culinary offerings.

“We especially love Sulubahçe Beach in the morning hours, where it feels like you’ve just landed on a remote beach in the Maldives,” says Domaniç. She recommends a long Turkish breakfast afterwards rengigulwhere chef Türkan Çim Işık prepares special salads, pastries and island jams based on the best products of the month.

Bozcaada has a long tradition of wine production.

She adds: “We also love a late seafood lunch or early dinner Yalova restaurant; homemade Turkish delights like mantı, çiğ börek and zeytinyağlı dolma at Hanımeli; a complete chef’s menu in the vineyards of Maya; cocktails at Sapa; and late night music and DJ performances 49 Pole duckwhich often turns into a fun street party.”
One of the most fascinating collections on the island is hidden behind a bright red door in a stone house built in 1876. That Bozcaada Museum is filled with more than 15,000 photographs, documents, maps, etchings and objects that tell the long history of the island.

After coming across a black-and-white etching of Tenedos and four postcards in an antiquarian bookshop in Istanbul in 1988, the antiquarian Hakan Gürüney embarked on an intensive and systematic collecting journey into the history of the island.

He founded the museum in 2005 to display the accumulated collection of items and donations from islanders who recognized the importance of sharing their own personal family stories.

Upstairs, each room tells the historical events that shaped the island. In the basement, glass cases are filled with everyday island items from the past, from vintage groceries to toys to wine bottles and more.

As soon as the ferry departs for the mainland again, the islanders are separated from the visitors again.

And as summer fades all but a few shops and tavernas close while the locals take back their streets, minding their own business, perhaps reflecting on the past or looking forward to the future when the island is filled with them again who want to share their isolation, just for a few days.

Feride Yalav Heckeroth is a freelance author and lives between Istanbul and Lake Constance. Her writing has been published in Kinfolk, Brownbook, Travel + Leisure and Conde Nast Traveler. She is also the author of her own travel guide, The 500 Hidden Secrets of Istanbul.