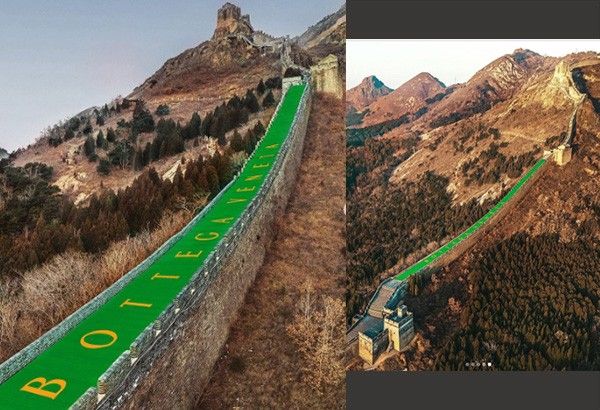 MANILA, Philippines – For the past year, Italian luxury fashion house Bottega Veneta has been causing quite a stir with the way the brand is deviating from traditional marketing strategies.

This year is no different as Bottega Veneta recently took over part of the Great Wall of China with a digital screen and a promotional logo. Chinese characters have also been added to the ad presentation. The characters mean “Happy New Year”. According to the brand, the marketing execution is in honor of the Chinese New Year.

The installation was also executed in the brand’s signature green as well as a tangerine orange. The brand chose the colors because they are a “lucky symbol in China”.

This latest ad is another example of the brand’s experimental approach to marketing. Over the past year, the brand has invested in eye-catching outdoor advertising, such as on rooftops near Los Angeles’ LAX airport, so passengers could see them as they take off and land in the city.

Related: In photos: The fashion trends of 2022 are reminiscent of WFH, the year of the tiger

Speaking about the brand’s decision to leave social media, Kering CEO François-Henri Pinault said in February 2021 that the strategy is to allow social media users to lead the conversation around the brand, and not the brand itself.

Creative director Daniel Lee announced his departure from the brand in November last year. Later that month, the brand named Matthieu Blazy, former deputy to Raf Simons and Phoebe Philo, as his successor.

Credello: How to make your student loans inflation-proof